Those of you who are connected to me on Instagram, saw a few pictures of this beauty right away, but I wanted to document the miraculous process here, and share some additional photos with you all!

Springtime of last year I dug up young (common) milkweed shoots from the alleyway, and transplanted them into my garden. Since it grows in alleys and ditches, maybe this appears an odd move to some, but I don’t much bow to the social construct of “weeds” – I’ve always thought milkweed is pretty and I also knew it is edible! Once I learned it attracts pollinators, especially the monarch, it was an easy choice for the garden. Now that it is flourishing, let me also tell you that it smells amazing! It perfumes the air so intensely, you can easily smell it when simply walking by, similar to lilacs. What’s not to love about it?! 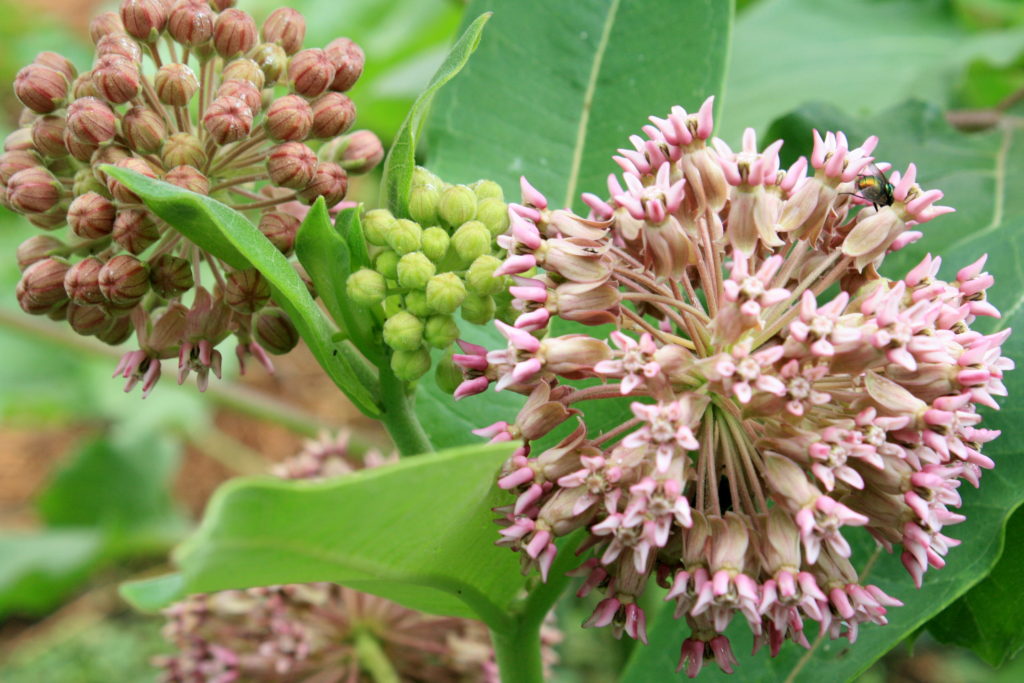 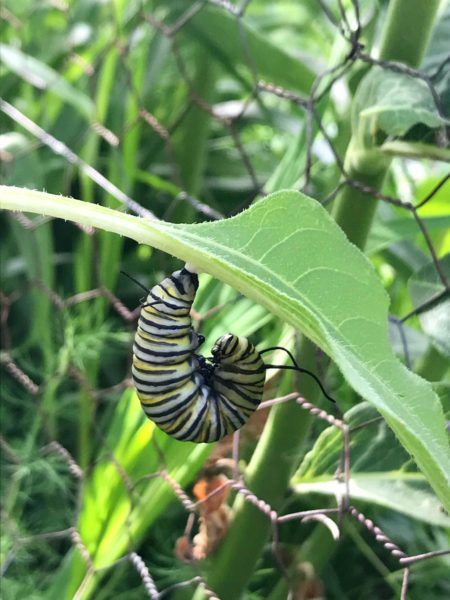 I was mulching the garden near the milkweed, when I spotted a monarch caterpillar attached to the underside of the very bottom leaf of a neighboring sunflower!

I read that the monarch lays its egg on the milkweed plant; later, the new caterpillar then feasts on the milkweed, but moves off the milkweed up to 20 feet to hang its chrysalis. We were very fortunate this guy stayed quite close to the milkweed and in easy viewing!

I spotted the caterpillar for the first time in the morning of June 14th. When I checked it again at the end of the day, it was already completely enclosed as shown in the next photo! It amazed us that the process happened so quickly! 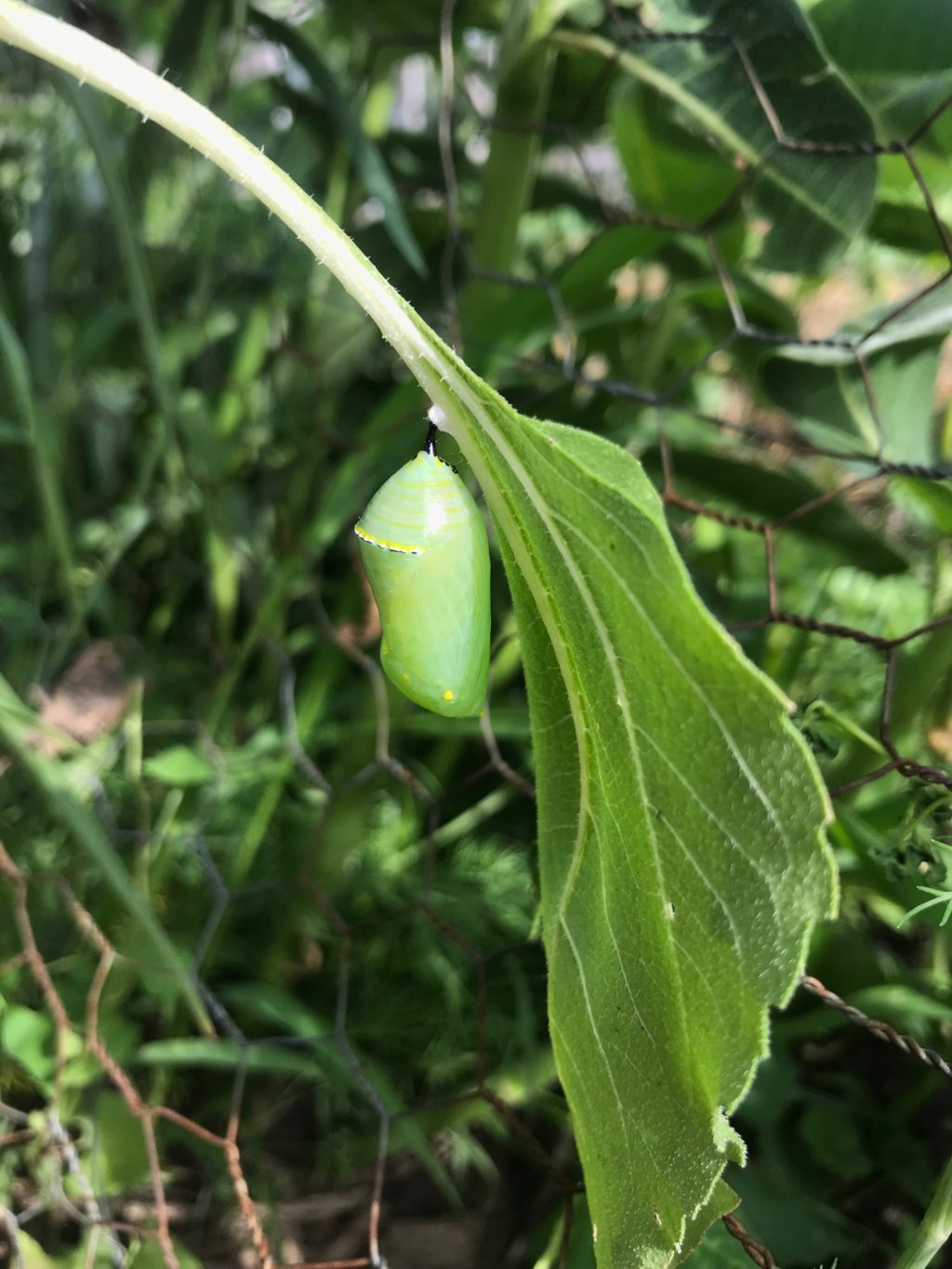 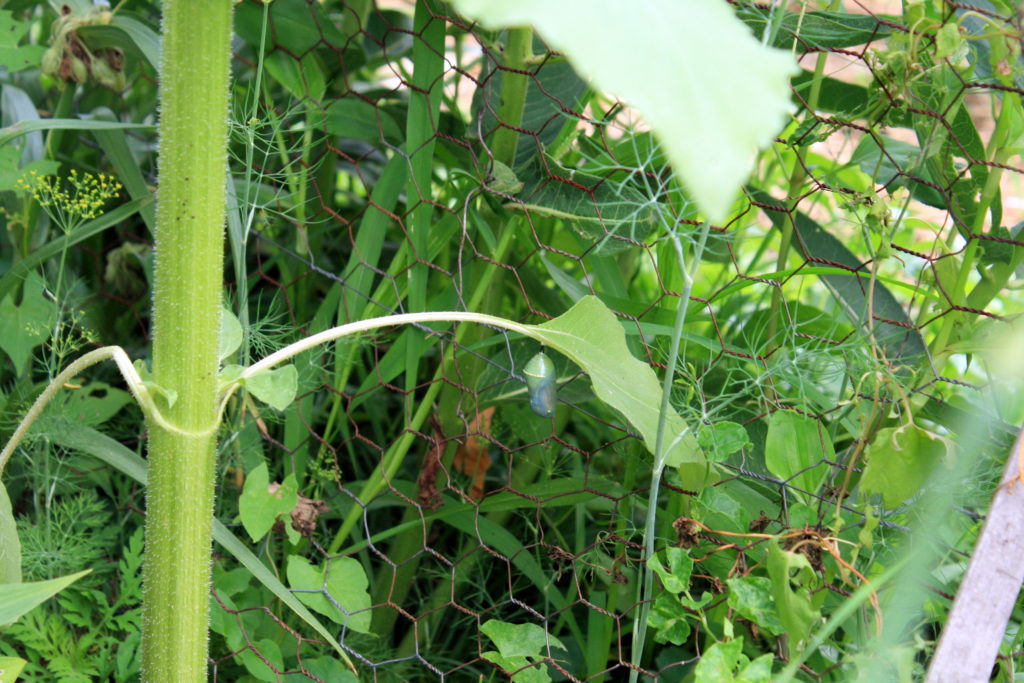 Here’s a zoomed out photo so that you can get an idea of the scale and location of the chrysalis.
Honestly, this dangling pod appeared so vulnerable to me! What if a bird or a squirl nabbed it? What if a bunny just bumped it, would it get knocked off? We kept the location of the chrysalis hidden from our curious toddler, and instead told him about it through my photographs, until the butterfly emerged, at which point, it was safe to let him get close.

We checked the chrysalis daily even though we knew it would be somewhere around ten days before the butterfly would be ready to emerge. 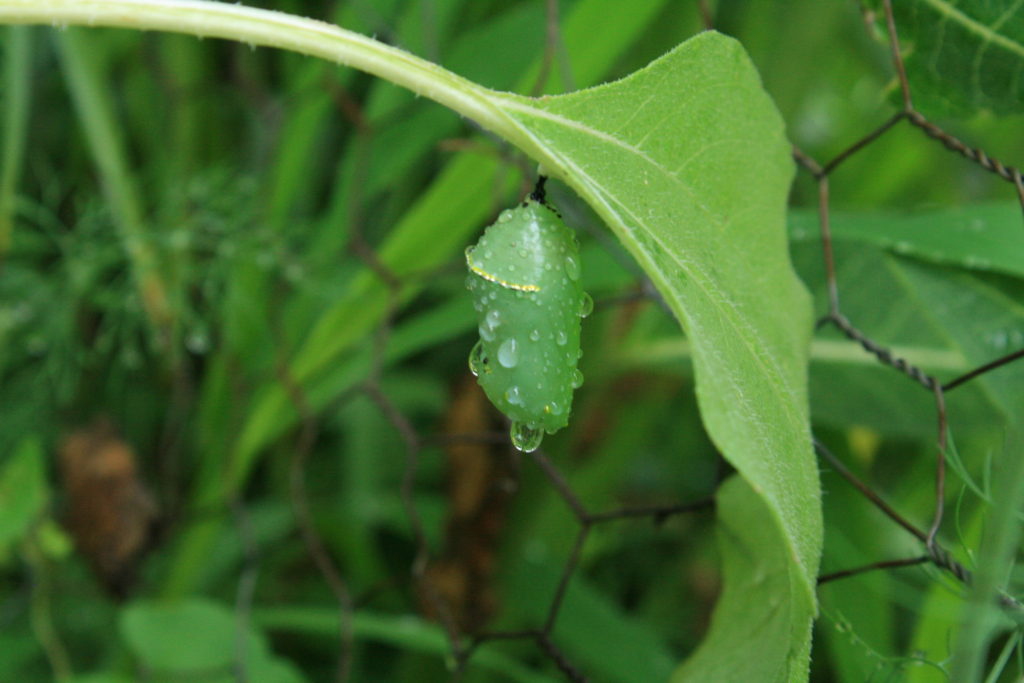 That first day, I contemplated removing the sunflower leaf and keeping it safe in some set-up similar to what people have when they order a caterpillar to raise. We ultimately decided against it, and I couldn’t be more thrilled that it all worked out.

The day before the butterfly emerged, the chrysalis began to turn from green to transparent, allowing us to see some of the monarch wing pattern! 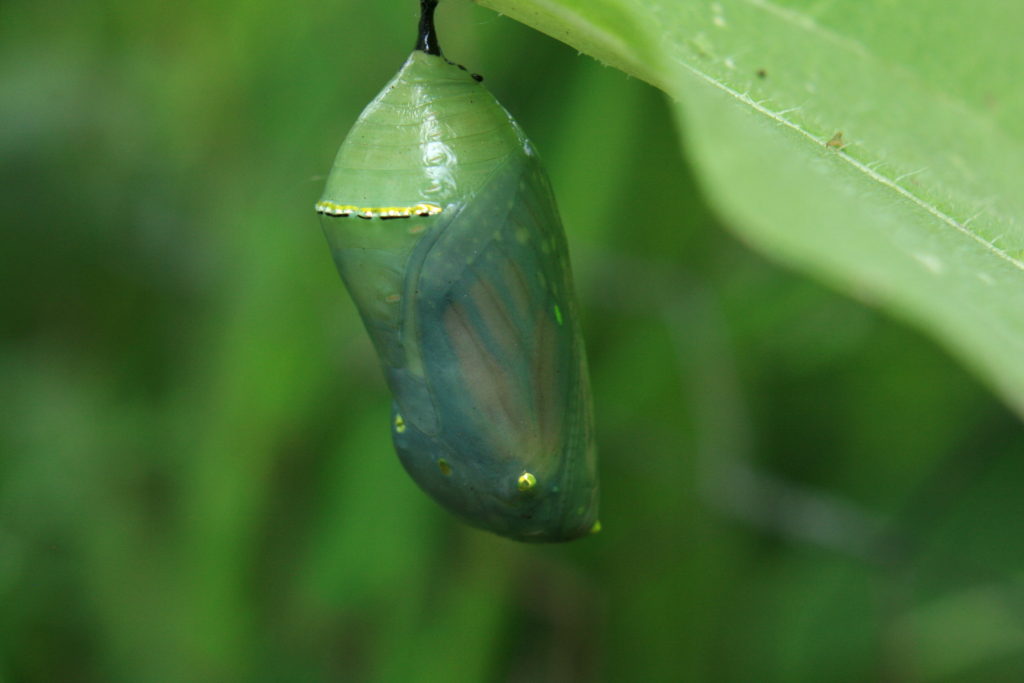 I checked the chrysalis early the next morning, and it was completely transparent, as sign that the butterfly will soon emerge! This was truly an incredible sight! 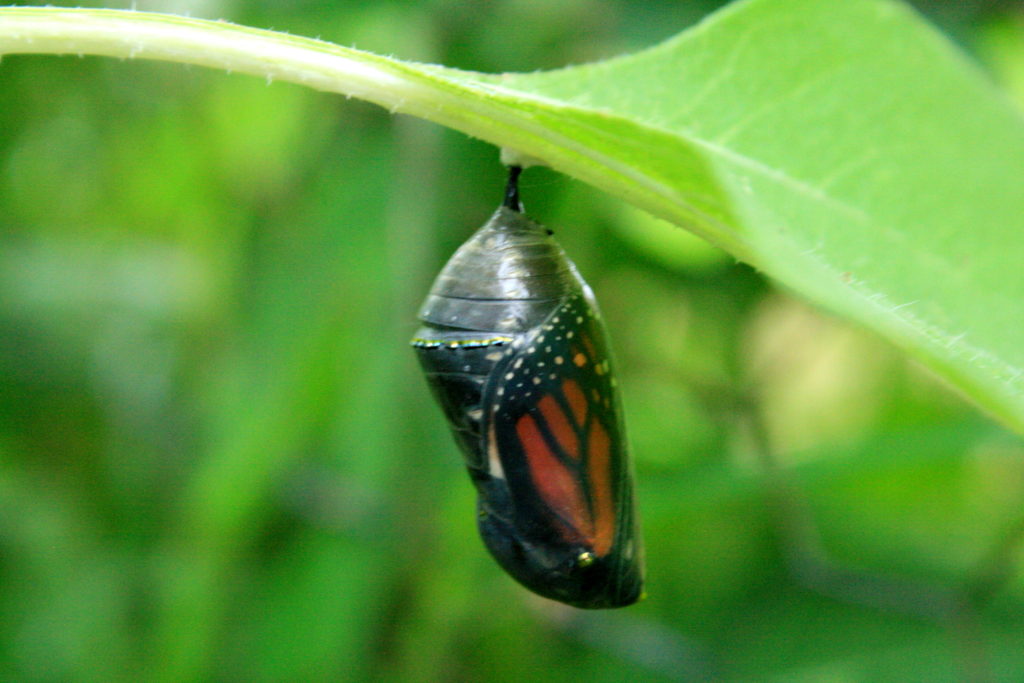 Another sign that the butterfly is about to emerge is that the rivets in the cap begin to stretch, or separate as shown below. 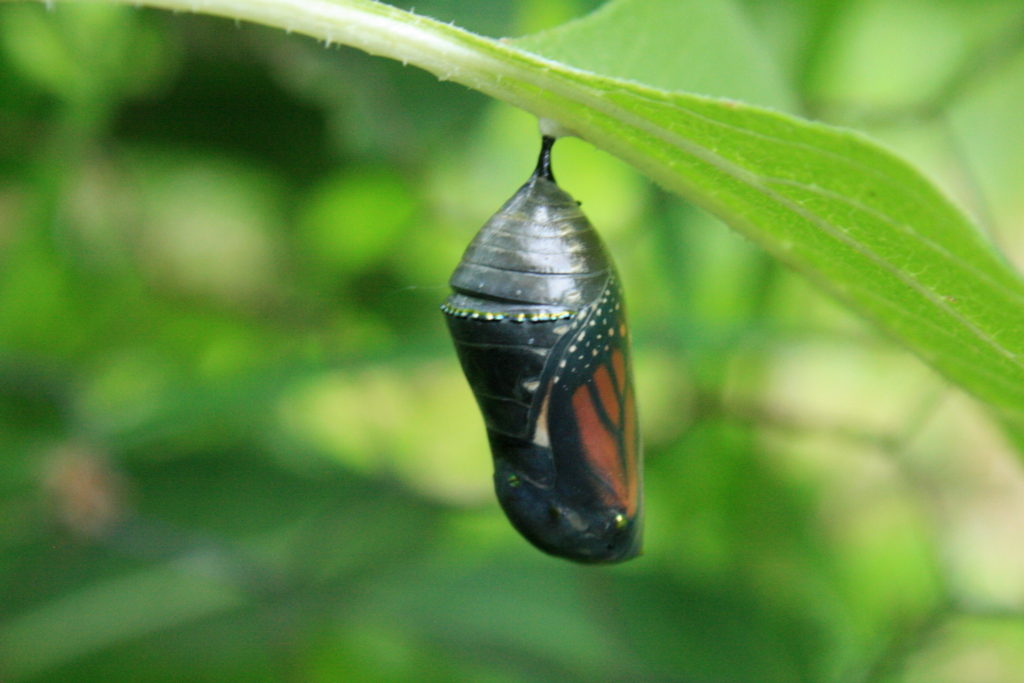 I was about to leave for my morning run, but didn’t want to miss the butterfly emerging if it were to happen while I was gone, so I found a growing pot to set my phone on, propped it against a rock and ran a time-lapse video. 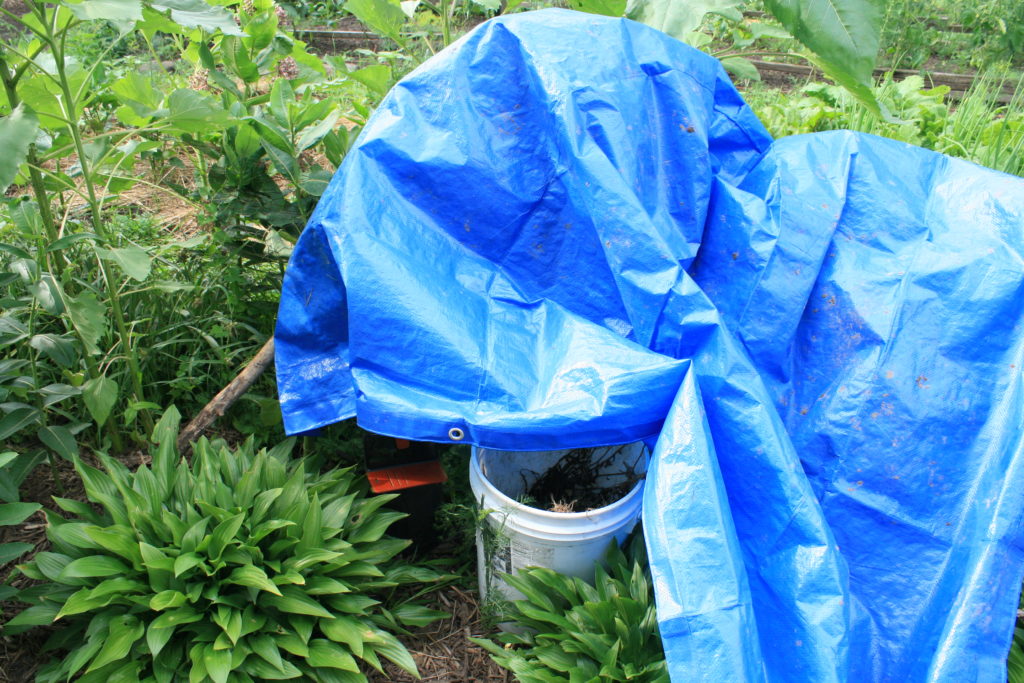 Unfortunately, it was windy and threatening rain, so I had to cover the set-up with a tarp, which significantly darkened my video. It did rain on my run, so I was glad I had protected my phone. It wasn’t enough to keep the phone from the wind, though, so the angle of the phone was disturbed and the video captures just the bottom portion of the chrysalis. It is pretty incredible to watch anyway!

Just after the butterfly climbs up to rest over the chrysalis and dry its wings, my battery died – it all worked out just in time.

When I returned from my run, I was greeted with this image! 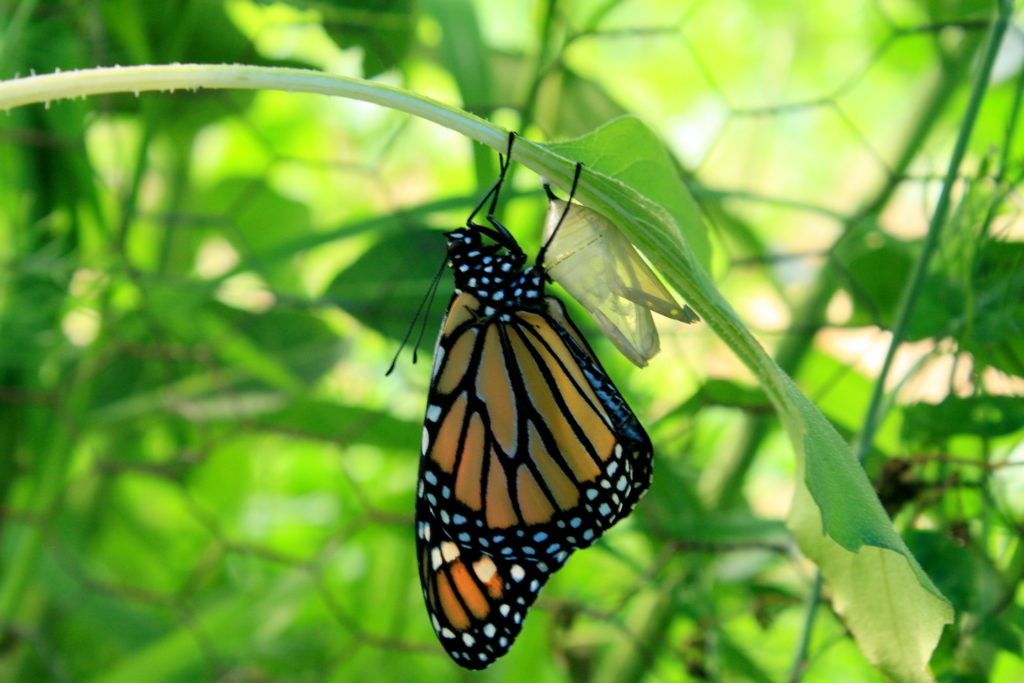 You can see how the bottom of the chrysalis is open. In my video, it comes out head-first, its body sort of flipping down, the wings unfolding last. Once completely out, it climbed into the position in this photo and remained there for quite some time. They do this to allow their wings to fully dry before flying.

It finally opened its wings when it climbed up the sunflower stock to find a better location for taking off. 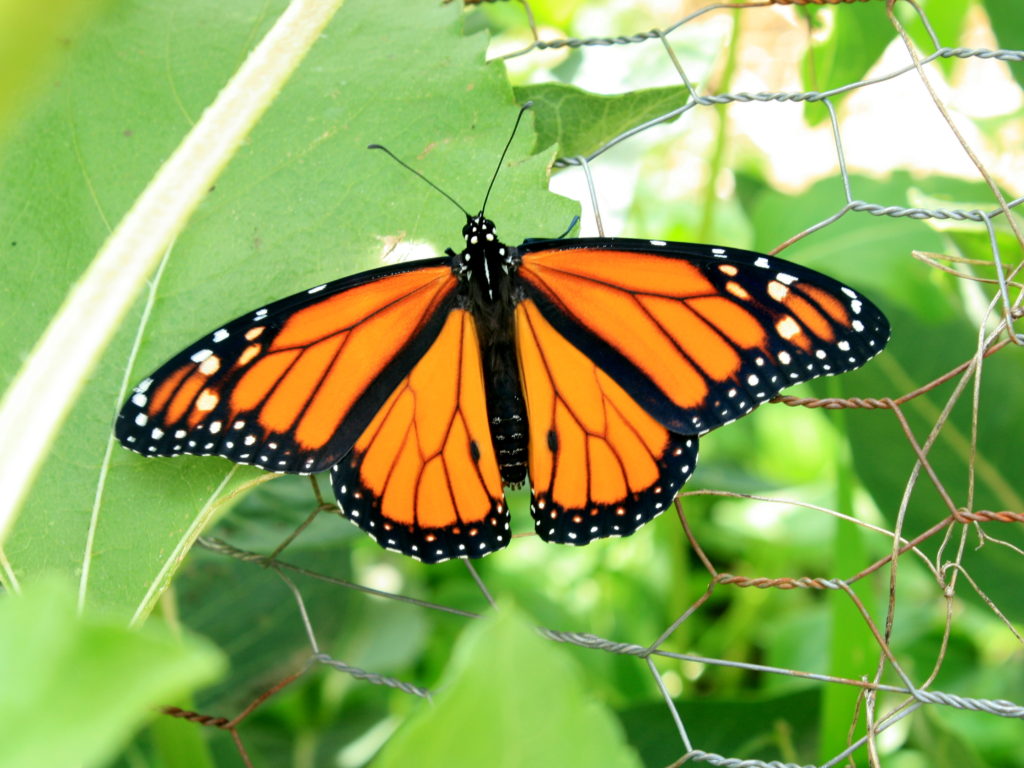 It didn’t travel far, landing nearby in the rose bushes, but this turned out to be a much more vulnerable location with all of the wind! It really seemed a terrible day for a new butterfly to enter the world. The poor thing clung tightly to a leaf, swaying and bobbing in the wind. 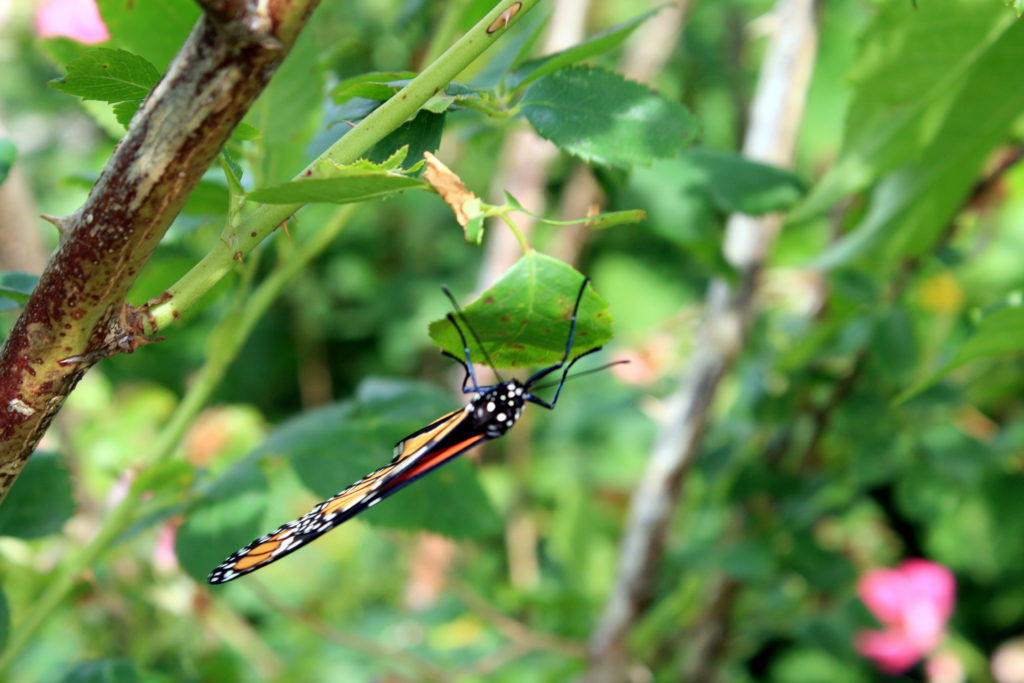 Later that day when I entered the garden to harvest basil, I startled a monarch. When we see a monarch over the next few weeks, we will surely wonder if it is that particular monarch that we so closely watched come into the world. What an honor to watch this miracle of nature.

I feel so incredibly fortunate to have the opportunity to create and tend this oasis in the city. I am more motivated than ever to create pollinator-friendly spaces to help support this delicate ecosystem. I hope more and more people will be mindful of how their growing and land management practices affect so much more than us big humans. Indeed, we depend on these pollinators; and we are not the only ones who depend on this land. May we all be more mindful of the consequences of our actions and do a little extra to help life of any type truly thrive.

What wildlife have you come across lately, whether in the garden or elsewhere?