← My Garden Right Now
From Caterpillar to Butterfly: A Monarch in Our Garden → 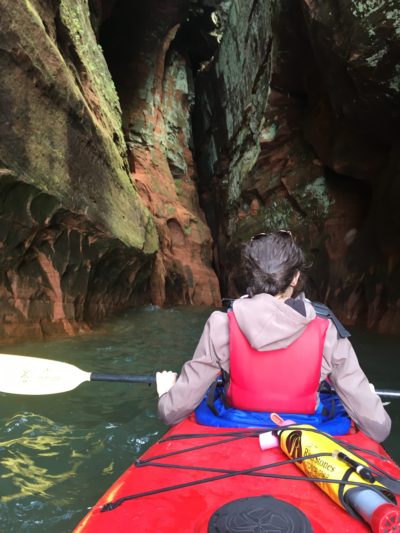 I haven’t posted in a couple weeks primarily because my camera battery charger broke. And what’s a post without photos, eh? The charger actually broke a while ago, but I successfully hobbled it along until its recent revolt. Sadly, this happened right before the husband and I were leaving on a fun trip to celebrate ten years of marriage. I don’t have fantastic photos of our getaway, but here’s a phone snapshot. We kayaked the sea caves of Lake Superior. It was a gorgeous day, and so much fun!

When we returned from our few days away, the garden (and weeds) looked doubled in size. I’ve been putting in steady work out there since, weeding, mulching, pruning and planting some more. I’m feeling somewhat discouraged about the vegetables. I’ve had a pretty major beetle infestation causing lots of plant loss (I’ll talk about that later). Also, the combination of a late blizzard and extreme early heat that nearly pinched away spring altogether has been tough on some beloved garden gems. They are still hanging on, but growing slowly. I have been really encouraged by last year’s new perennials filling in, though. Several types of flowers are blooming these days.

I’ll admit, hopefully without offending anyone, that I’m not a fan of many common ornamental perennials. Wildflowers reach much deeper in my soul, and many that I grow are also medicinal, which certainly pleases my overly function-oriented self.

Sedum is not medicinal, that I know of, but I have heard it is edible, though I’ll admit that I haven’t tried it yet. I just adore this particular variety and the way it grows over rocks, fills in so well, and flowers, so had to include a happy snapshot.

Growing and adoring flowers is very new to me. It’s so fun to dabble in this new world and watch it unfold before me! I’ve been obsessed with growing food since I started gardening eight years ago. I knew flowers would come in time, once I got a better handle on the food, but my daughter’s interest in flowers and a large unexpected landscaping project hurried that development along. I’m so glad that it did!

The problem with growing flowers to use for medicine, soap, cooking or natural dyes, is that you must harvest them. We enjoy seeing them in the yard so very much, that it is sad to cut them for processing! Now, digging up the burdock and harvesting the comfrey and plantain leaves, I can easily manage parting with those medicinal plants!

What flowers are blooming in your garden?

← My Garden Right Now
From Caterpillar to Butterfly: A Monarch in Our Garden →