← 1 becomes 3: Dividing and transplanting seedlings
Your Complete List of What to Plant in Early- to Mid-Spring →

Since my last post, I have been working on dividing and potting up our numerous pepper and tomato plants. I currently have 70 peppers plants, sweet and hot combined, and 86 tomato plants of 14 varieties! 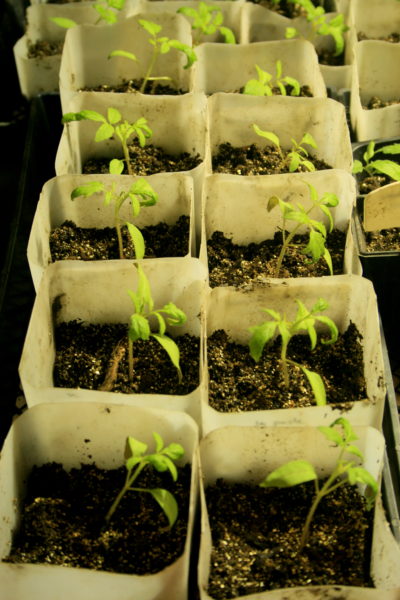 The problem then became where to put all these plants. Taking them from their small germination cells to larger pots significantly increases the number of plant flats!

My preferred way to pot up my tomatoes is to use the bottom of a half gallon milk jugs. (Make sure to puncture drainage holes in the bottom if you do this.) My tomatoes get quite large in the greenhouse, so these larger containers provide them plenty of room. I also like that they are square, so I can snuggly fit ten pots on one flat. Ten pots per flat = 9 flats of just tomatoes alone!

Typically, when I pot up the tomatoes and peppers, I move all the plants from the basement lights to the greenhouse. The transplants usually spend April and May growing strong and awaiting warmer weather.

This April, the temps here have been so low that I have not been able to keep plants in there! Even you non-Minnesotans must have been able to hear us grumbling about that 16-inch April snow blizzard!

Despite the weather, I still had to divide and pot up the plants before they became overgrown and tangled beyond repair in their tight germination quarters. As luck would have it, last Fall a new homeowner down the alley set out a MASSIVE grow light free for the taking! I snatched it in a hurry with no shame but had yet to try it. 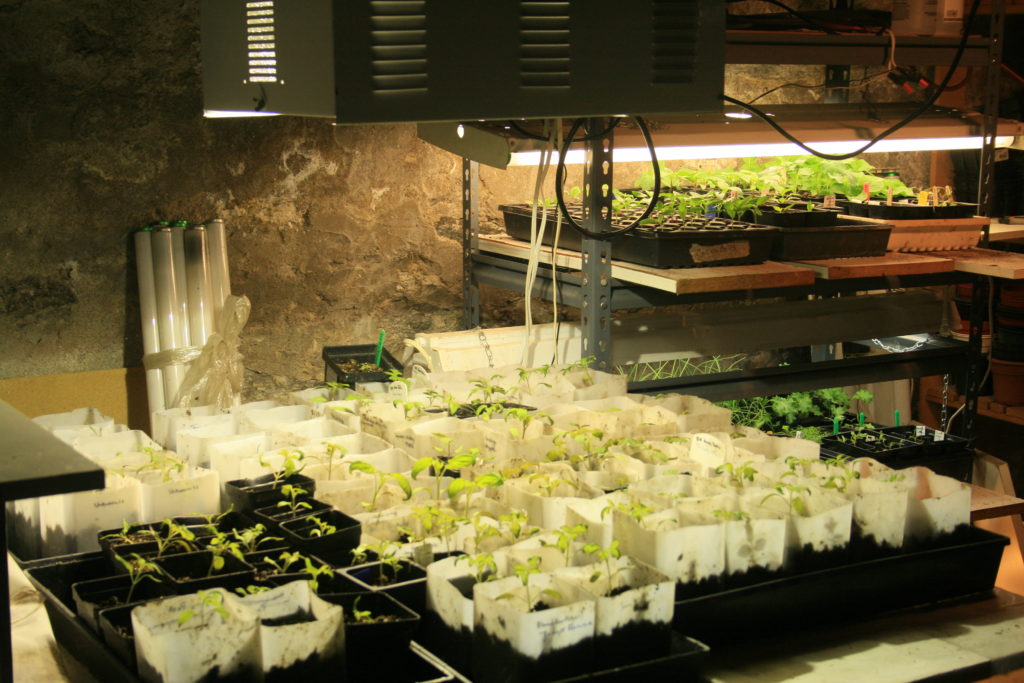 To this point in my years of gardening, I have not used a proper grow light. When we bought this old house, we inherited a few cheap shop lights that have been doing the job just fine. It was exciting, then, to set this new light up. Being larger than the others, it was able to provide light for plants in an entire 3 ft x 3 ft area! It also provides significant warmth to the plants, where the shop lights do not. The tomatoes received this new experimental treatment, and have done well. (There is no comparison that they grow much, much faster in the greenhouse, though.) 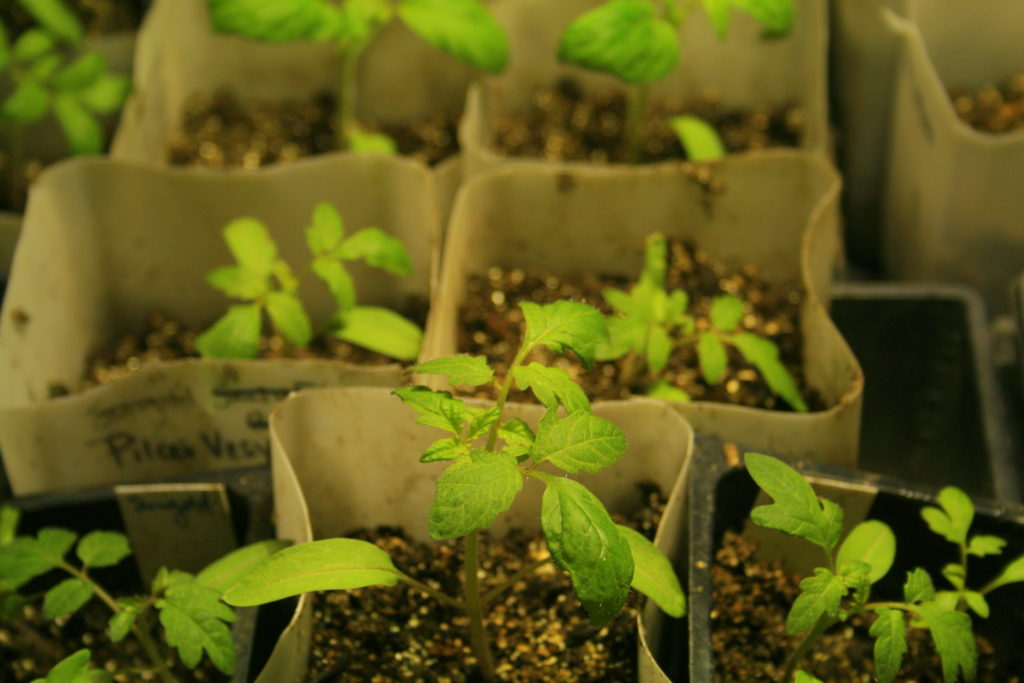 The fancy new grow light solved the greenhouse dilemma for the tomatoes. As for my peppers, I utilized my south-facing windows in the living room for the first time. Sadly, having run out of space for pepper flats, I did not pot up my poblano peppers. They were the only pepper variety where I didn’t double up in the cells, so I kept them there where they eventually seemed to be bursting in their small cells. 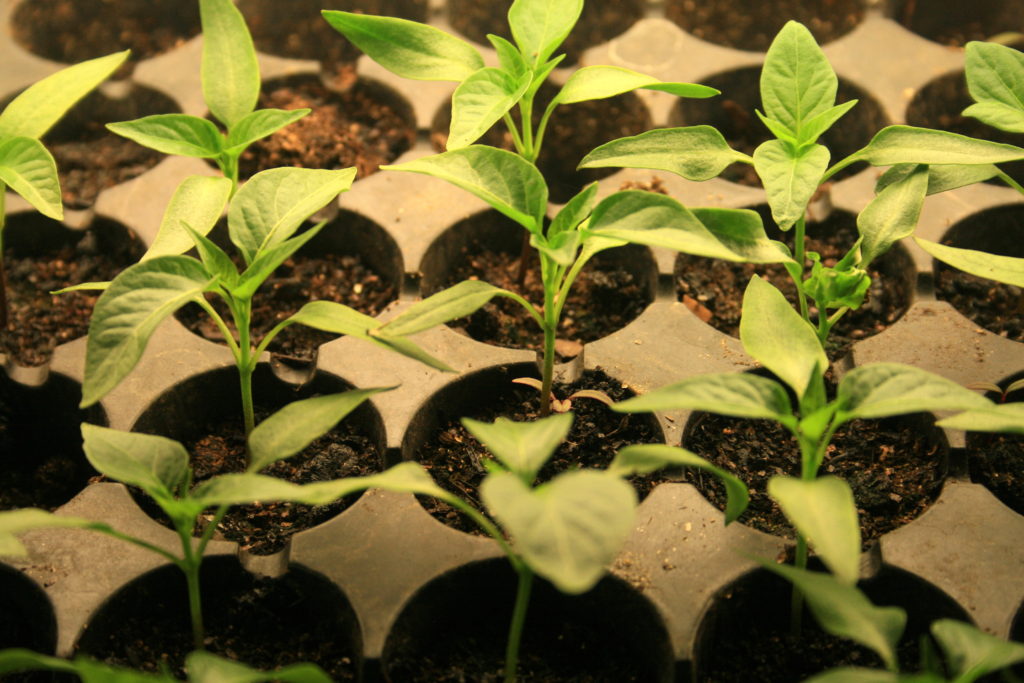 All this creative finagling ended this weekend, though, when Spring stood up tall and we finally bid Winter farewell. The poblanos got bigger pots and they all have a home in the greenhouse as of Saturday. I’m excited to watch them take off!

The brassica flats are all looking akin to forests, so they will be grateful to (soon) find a home in the ground. Having had such a wintery forecast for much of April, I never did not even seed my lettuces, melons, cucumbers or okra. What a shift a week makes!  I’m really looking forward to sowing some seeds outside now! 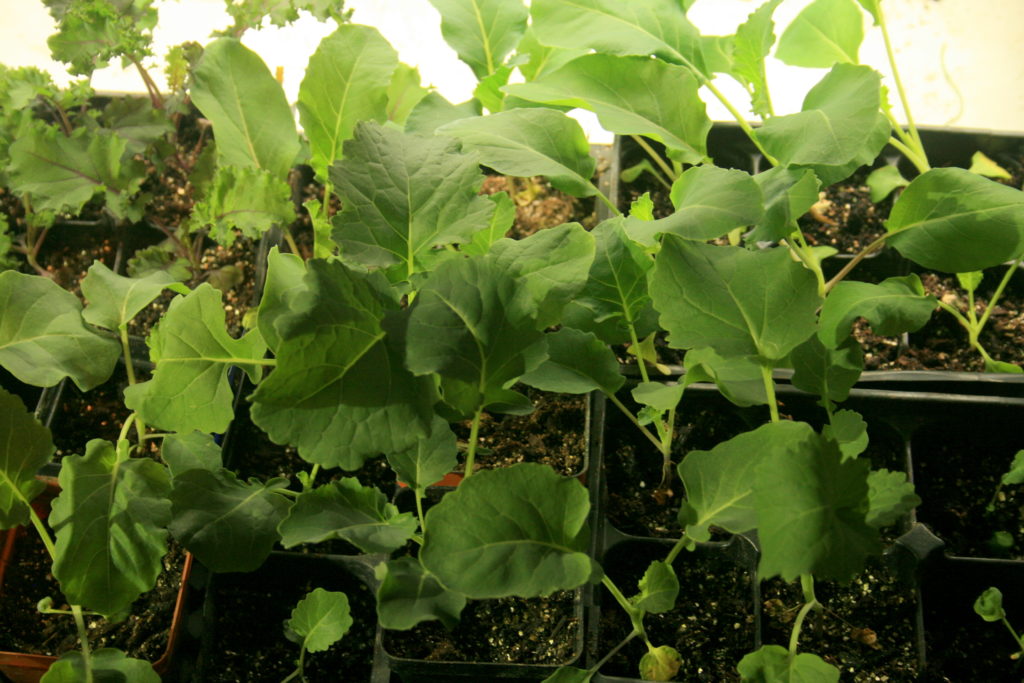 What Spring garden tasks are you tending to these days?

← 1 becomes 3: Dividing and transplanting seedlings
Your Complete List of What to Plant in Early- to Mid-Spring →